Official business all done – time for a stroll through the tiled streets of beautiful Santa Barbara.

We experienced Santa Barbara as tourists, not delegates on a mission. Fun filled memories in the sun ☀️ chatting, lounging, appreciating the Ambience that is Santa Barbara.

We walked & talked and ended up in La Arcada. In true Santa Barbara style, with entrances on State Street and Figueroa, this is a quaint and charming substitute for the larger shopping malls. Tile-lined walkways, fountains, cafes and beautiful sculptures. 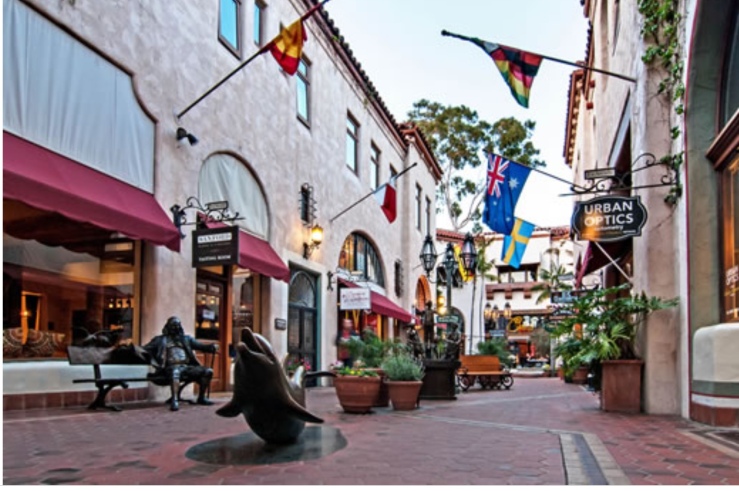 Tip: La Arcada is a must for Dingle visitors  – enjoy the Replica Fungie Sculpture by James “Bud” Bottoms . 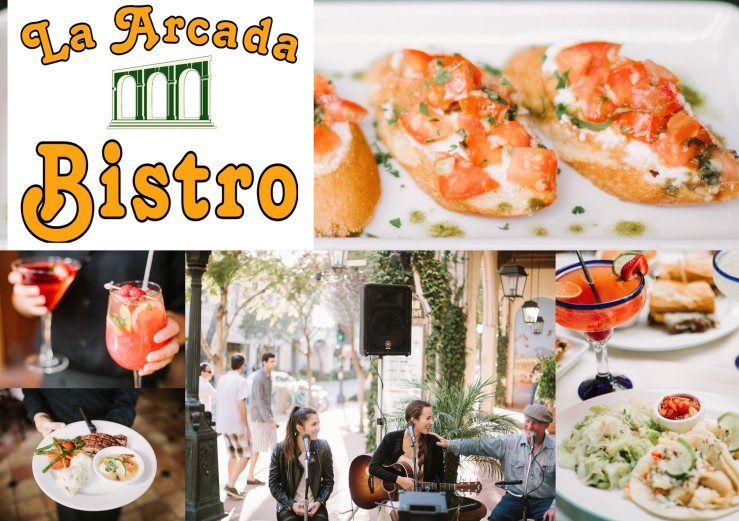 La Arcada Bistro is a local family owned restaurant. The owners Willie, from Ireland, and Trini Quinn, from Mexico bring together beautifully their two backgrounds and Californian cuisine, creating a unique dinning experience.  Every weekend you can find Willie and his daughters, Aoife and Brigid Quinn, playing Irish music in their band, The Foggy Dew.

We collected our V.I.P. Santa Barbara International Film Festival (SBIFF), passes earlier in the day.  Compliments of SBIFF. Free Access to all screenings (after parties etc.) via The V.I.P. Red Carpet Gate – A girl could get very used to this.🎬🎬🎬

I’m excited to see the film. I loved the book & I’m a big fan of Jeff Bridges, “The Dude” 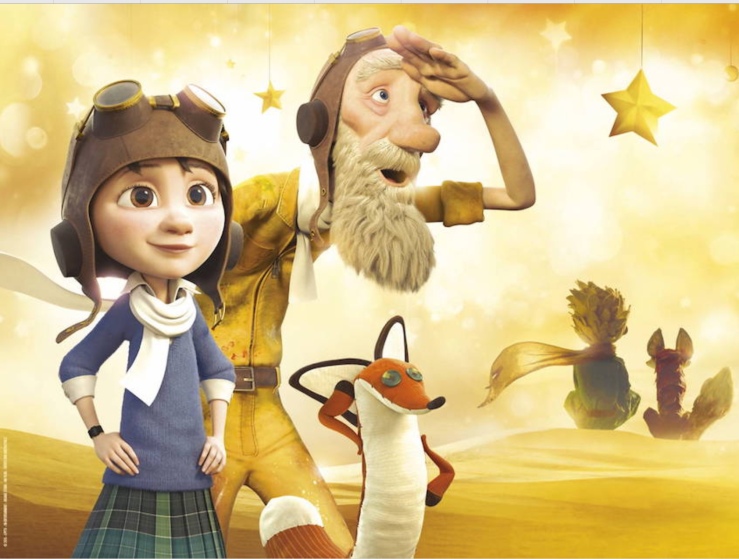 Our first experience. We try to go the Arlington Theatre. The streets are all blocked off.  There are thousands of people trying to get in. We go outside the barricaded crowds. I spot a desk with the magical initials “V. I.P.” Yay 😁

Passes presented. Success we are escorted to the Red Carpet. Feeling important  😉

I’m Gobsmacked 😶People are staring at us. There are two red carpets. One for those receiving awards and their guests. The other for V. I. P guests. I kid you not.              The Press, photographers, TV cameramen etc. are positioned in between the two red carpets. The stars are arriving ✨✨🌟🌟🌟 on the other red carpet. Cameras flashing, TV reporters, chaos. We keep walking🚶‍♀️🚶‍♀️ We eventually make our way inside the crowded theatre. Breathtaking – the ceiling is like a night sky. The theatre is built to give the audience the impression that they are sitting outside in the plaza of a colonial Spanish town. There are houses, stairs, and balconies, built out from the walls. I’ve never see a theatre like it.

We take our seats ( great spot). The live screen is showing the stars arriving ✨✨✨ We were filmed too – we didn’t see it but a friend of Patrick (Pat), my brother told us afterwards that she saw him. She was as excited as we were.

In a separate TV interview The Mayor said “I’m really excited this year. There is a contingent here from our Sister City Dingle, Ireland & they are showing Irish Animation Films during the festival. This is the first time a Sister City had a formal connection with the festival”

Next thing SBIFF Executive Director Roger Durling welcomed the crowd & turned up the lights. (We hadn’t a clue why all the lights were switched on – An evacuation? an earthquake?  ( we’re in California)
He proceeded to invite us, the audience us to get to know our neighbours (He does this every year )
It was terrific everyone was shaking hands and chatting.
“You are from Ireland! Are you with the Delegation?” I proudly produce my V.I.P. pass clearly stating Dingle Santa Barbara Sister City Delegation. Fame at last✨✨✨

Brian had a private meeting with Roger Durling, director of the Santa Barbara International Film Festival in 2015.
The interview went well and the end result brought DIFF to Santa Barbara. Roger asked Brian if he’d meet for a drink later.
He joined us in “The James Joyce“ pub that evening.
We had a lovely relaxing conversation. He loves Ireland and visits very often. He asked about our children and our business http://www.briandeststaic.com
I never realised at the time that he was a Super Star⭐️
Roger Durling IS the Santa Barbara Film Festival

Roger introduced the evening’s film, “The Little Prince” and welcomed director Mark Osborne and stars Mackenzie Foy and S.B. native dude Jeff Bridges to the stage. Jeff Bridges was instrumental in getting this film made.
“The Dude” as he is affectionately called, was presented with the Riviera Award.

Jeff Bridges on stage with Mackenzie Foy, wooing the audience. What an experience. 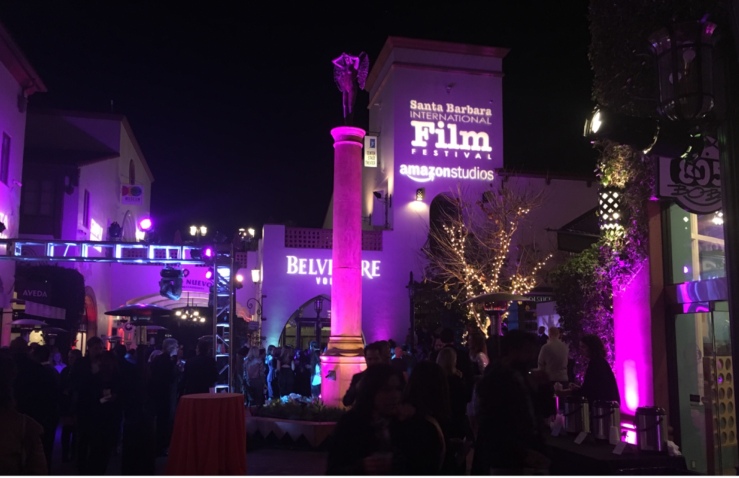 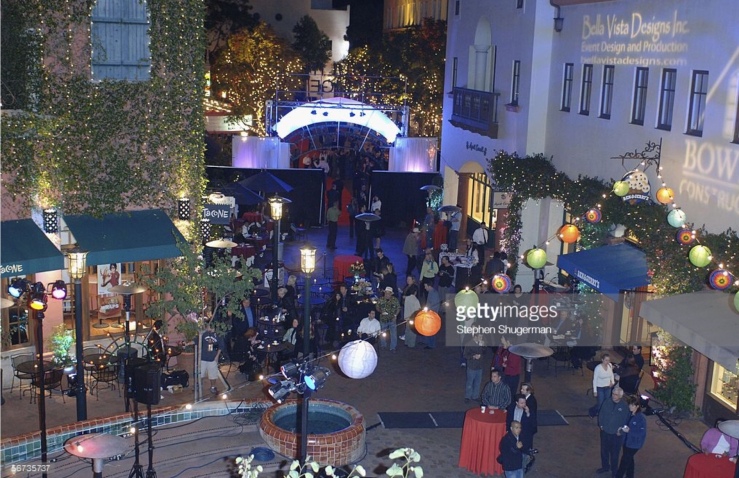 Following the screening, we made our way to the opening night Gala at Paseo Nuevo.   Paseo Nuevo is Santa Barbara’s main shopping mall in the heart of downtown. The beautiful Spanish Paseo Nuevo transforms into a film-themed gala filled with food and drinks, dancing, and live entertainment.  It reminded me of the Dingle Food Festival. Restauranteurs, chefs, wine makers, delis, bakeries, fish merchants etc. all have their own stalls. We sampled lots of different food & beverages. The crowd was hopping to the music. The atmosphere was electric. 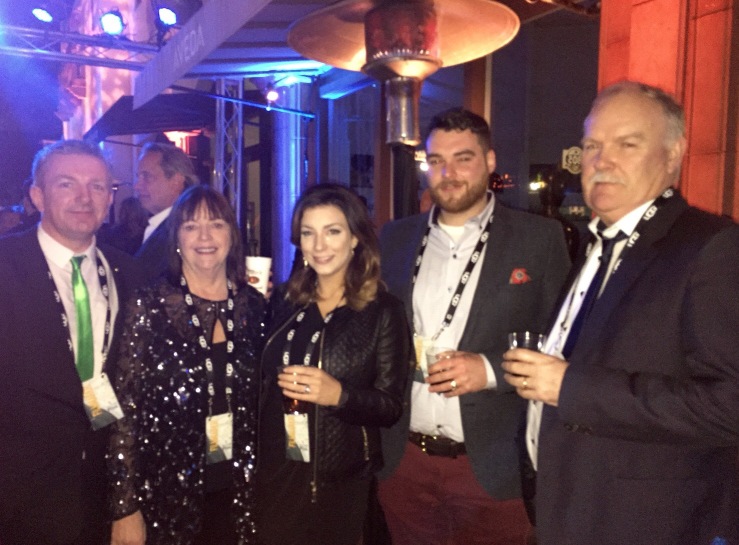 The following morning Thursday 4th February our celebrity status was confirmed ✨✨🌟🌟🌟⭐️⭐️
We were invited on a TV show called “Worthen One on One”                                    Brian, myself, Maurice & Willie had an early start, but we were happy to promote The Dingle Peninsula, DIFF Animation Screenings, The Santa Barbara Dingle Sister City & Brian de Staic Jewellery. 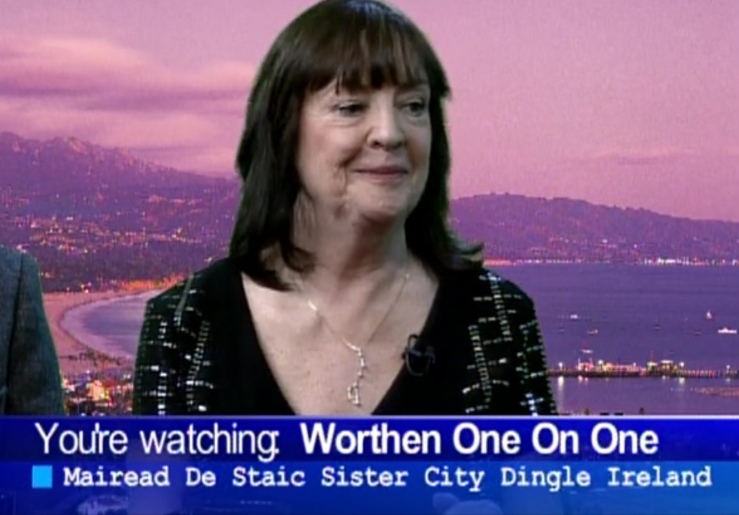 I had a very bad cough that morning. Once I started coughing I couldn’t stop.              It was a live recording, no retakes. For the first time in my life I couldn’t talk.               A new experience. Brian did the business for us both. Halfway through the interview I recovered enough to join in and not look like a complete fool, haha 😂

We arrived back at La Arcada Bistro just in time for lunch. Mike Galway was chatting with a very nice lady.

“You’ll never guess who this is?” asks Mike.  Do you remember “The Late Late Show” and Gay Bryne’s catch phrase, “Roll it there Collette”

“Well, this is Collette of the “Roll it there Collette fame”  She was a lovely person and very interesting. We had a lovely afternoon relaxing 😌

That’s it for this blog. I hope you enjoyed reading it. Please like & leave a comment in the reply box below, thank you.

P.S. Check out the size of the turquoise van at the rear of the photo above. Only in California 😘

I look forward to sharing my thoughts with you.
I promise to do my best in bringing you content that will interest, inform, educate and motivate.

Slán go fóill – Bye for now,
Blogger to be,
Máiréad

This is a text widget, which allows you to add text or HTML to your sidebar. You can use them to display text, links, images, HTML, or a combination of these. Edit them in the Widget section of the Customizer.

This is a text widget, which allows you to add text or HTML to your sidebar. You can use them to display text, links, images, HTML, or a combination of these. Edit them in the Widget section of the Customiser.

The Homestead on the Plains

The many adventures of a first time homesteader

a pilgrimage of the heart

musings on life | bits of psychology | attempts at poetry

The Life Of I

Retired? No one told me!

Tonight I Dream. Tomorrow I Do!

Romancing the planet; a love affair with travel.

The best longform stories on the web

Confessions of a Motivating Freak

The Go To Girls Blog

Life, Love, Family and Travel as we experience it

Life with twins, dreams, and stories

Life after the kids are grown

A daily selection of the best content published on WordPress, collected for you by humans who love to read.

Living well in the urban village

The Art and Craft of Blogging

The latest news on WordPress.com and the WordPress community.